At the beginning of this year, Sutherland House signed Mike Blanchfield and Fen Osler Hampson to write an account of China’s treatment of the two innocent Canadian nationals, Michael Spavor and Michael Kovrig, who were jailed in retaliation for Canada’s arrest of Huawei executive Meng Wanzhou.

Blanchfield, who has covered the story for Canadian Press, and Hampson, a foreign affairs expert at Carleton and former director of the Norman Paterson School of International Affairs, worked away on the project through the spring and summer and delivered a manuscript to us in August. 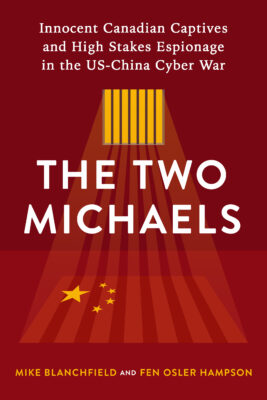 Our intention was to get it out the door quickly. Meng, at the time, was under house arrest in Vancouver, fighting Canada’s efforts to extradite her to the US to face charges of violating American trade sanctions with Iran, among other offenses. As far as we could tell, the extradition case was going to drag on a year or two, and until she was free, there was little chance the Two Michaels would be sprung from their Chinese prison cells, notwithstanding the protests of the Western diplomatic community. That seemed to create an opening for the book.

We set our publication date as November 17. In order to get The Two Michaels in stores by then, we needed it printed and in our distribution warehouses by the third week in October. That required us to have the text of the book and our cover jacket file to the printer by last Friday, September 24.

We worked like demons through the end of August and the first weeks of September to get the manuscript in shape. The authors did a fantastic job. They had great stuff on the arrests and backgrounds of the Michaels and Meng, the legal battles in Vancouver, America’s war on Huawei, the East-West battle for control of the future of the Internet, and much more. The purpose of the book was to explain the context and underscore the injustice of the Michaels’ imprisonment. Or, as we said in the promotional copy:

Obviously, we were publishing before the story was resolved, which is never ideal, but we believed the plight of the two Canadians, an international cause célèbre, was sufficient to carry the book. If the whole mess sorted itself out in a year or two, we’d publish an updated edition.

Just as we were making final corrections last Friday morning, word came over the wires that Meng was in court. She and Huawei had struck a deal with the Americans. She was being released. Before the day was out, we read in the New York Times that the Michaels were free and on their way home.

It was clear we couldn’t go ahead and print the book as it was, with an unresolved, open-ended final chapter. Everyone in the world would know the ending by the time we hit the stores. We had a choice between trying to write a new final chapter in a matter of days, in hopes that we could still get books in stores for our November 17 publication date, or delaying publication until sometime early in 2022.

(It did cross my mind that we were lucky to have that choice. If the prisoner exchange had happened two weeks from now, we’d have been sitting with thousands of copies of a book with an outdated ending.)

We opted for the short-term solution. Mike and Fen were confident they could use their excellent contacts in Washington and Ottawa to find out how things were suddenly resolved, and they did. They wrote a brilliant finale in no time at all. Our extremely helpful printers, Houghton Boston in Saskatoon, gave us a few day’s grace and we managed to get our new files into them this week and keep everything on track.

It won’t be over until it’s over, given the many logistical challenges facing everyone in publishing right now, but we’re feeling pretty good about it. And relieved.

Watch the Toronto Star this Saturday for a big excerpt from The Two Michaels: Innocent Canadian Captives and High Stakes Espionage in the US-China Cyber War.

You can pre-order the book here or here.

Meanwhile, since this is a publishing newsletter, a brief tease of what the Two Michaels were reading in prison:

Kovrig subjected his mind to a rigorous discipline. Books are crucial to him. He tried to fill in some of the gaps in his understanding of literature by reading Tolstoy’s War and Peace. Nelson Mandela’s autobiography, The Long Walk to Freedom, as well as books on philosophy have been on his reading list. He was particularly drawn to the stoic philosopher, Marcus Aurelius. He drew strength from St. Paul’s “Letter to the Romans” in the New Testament…. He reread a favourite book from his life before imprisonment, Nassim Nicholas Taleb’s Antifragile: Things That Gain from Disorder, and found new meaning in it.

Spavor also had his own voracious reading list. He asked for large-print Chinese study guides, books on geography, politics, medicine, venture capital fundraising, entrepreneurial start-ups, prison biographies, biographies on the Beatles and former US president Bill Clinton, a copy of Gary Shteyngart’s novel, The Russian Debutante’s Handbook. He also wanted books on “true and amazing stories,” books on “understanding” China and the Chinese people, and books on diplomatic history and “dealing with difficult people…”

Spavor also wanted a copy of Viktor Frankl’s Man’s Search for Meaning, a book that emerged in 1946 after its author had survived imprisonment in a Nazi concentration camp during the Holocaust. It’s not known what specifically drew Spavor to Frankl, but there are plenty of clues. As Frankl wrote: “The one thing you can’t take away from me is the way I choose to respond to what you do to me. The last of one’s freedoms is to choose one’s attitude in any given circumstance.”