Things are finally looking up for Canada’s biggest book retailer

companies whose shares trade on the Toronto Stock Exchange (TSX) make their leadership available to investors and financial analysts via conference call.

The leaders, usually the chief executive officer and chief financial officer, offer a brief presentation of their quarter’s financial results and provide a little color on the progress of their business. The conference operator then takes a handful of questions from the professional stock analysts on the call (and, occasionally, one or two from an individual investor). The analysts try to ask tough, or at least searching questions. The leaders try to field them without tanking their share price. 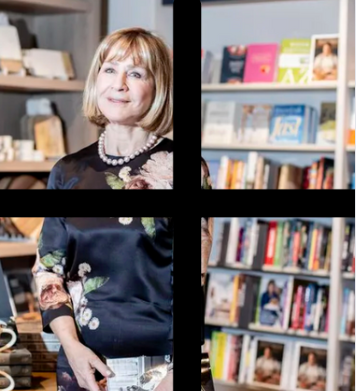 The leaders, usually the chief executive officer and chief financial officer, offer a brief presentation of their quarter’s financial results and provide a little color on the progress of their business. The conference operator then takes a handful of questions from the professional stock analysts on the call (and, occasionally, one or two from an individual investor). The analysts try to ask tough, or at least searching questions. The leaders try to field them without tanking their share price.

If you understand the dynamics of the host company, these calls can be great theatre, never mind that the actors wear suits and the numbers wear the makeup. They’re often the only occasions in a calendar year when corporate leadership is answerable to shareholders in a semi-public manner. For good or ill, they can rank among the most important performances of an executive’s career. I’ve known CEOs who put weeks of preparation into each one.

But the quarterly calls tend to matter only so much as the company matters. If the stakes are low, it’s difficult to put on a show.

Indigo Books & Music Inc. may dominate the Canadian bookselling scene with its eighty-eight superstores and eighty-five small-format stores, but financially it barely registers. Its market capitalization (the total value of its shares) is about $90 million, far short of the median market capitalization ($148 million) of the 1,500 companies listed on the TSX. It’s possible to be small and relevant on the TSX if you’re future looks bright, but Indigo’s recent share price history (a measure of confidence in the company’s prospects) looks like this: 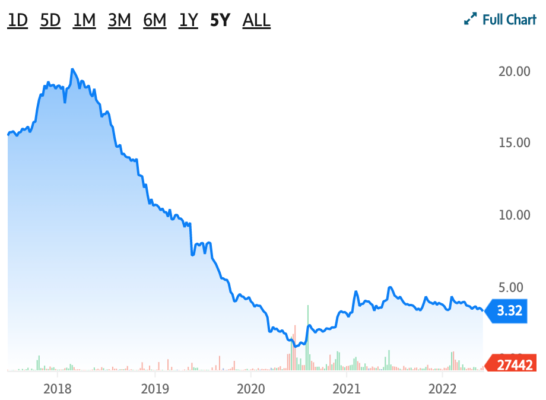 For at least two years now, only one analyst has bothered to participate: David McFadgen, a mid-level researcher at Cormark Securities Inc.

When Dave’s off fishing, as he appeared to be in the second quarter of 2020, Indigo CEO and controlling shareholder Heather Reisman, CFO Craig Loudon, and the (totally redundant) conference call operator have to perform the quarterly kabuki all by themselves.

Fortunately, Dave was available for the Indigo fourth-quarter 2022 conference call last week. Heather’s usual greeting of “Good morning, everyone!” didn’t sound as sad as it did when he was missing.

You’ll recall that when we last checked in, Indigo was on the skids (SHuSH 111, August 2021). We took no glee in this. Every publisher and writer in Canada has a stake in the chain’s performance, and last summer things looked bleak.

After losing $37 million in 2019 (the company was immunocompromised before COVID hit), $185 million in 2020, and $58 million in 2021, Indigo had coughed up another $15 million in the first months of 2022. That’s a lot of millions, even for Heather, wife of billionaire financier Gerry Schwartz.

The business environment, she rued, was an inferno:

The COVID-19 pandemic has negatively impacted the economy and consumer spending, disrupted supply chains, and created significant volatility in financial markets on a global scale, the extent of which will depend on future developments that are highly uncertain and cannot be reliably forecasted.

Heather had closed thirty-some stores. Her shares were trading at a tenth of their 2018 high of $20, and she’d needed a $25 million “liquidity enhancement” (i.e., bailout) from Gerry.

The only bright spots were that most Indigo stores, by last summer, had re-opened, and the company was doing better in its online business. Heather was seized by that digital improvement. COVID had changed the consumer, she said, leaving him/her more comfortable with buying off a screen. Indigo was “focusing all our effort on digital investment” to serve the new consumer.

Heather observed that the year would have been even better without an Omicron spike during the holiday season. She boasted of Indigo’s sustainability efforts and handed over to CFO Craig who recited the financial details.

(Incidentally, Heather did not boast of foregoing all compensation during the dark year of 2021 but she, in fact, worked for free, an act of accountability and leadership beyond compare in the recent history of Canadian business. I’m serious. The vast majority of CEOs spent the pandemic raking in government grants and subsidies and paying themselves bonuses. Bravo, Heather.)

Next, it was time for questions. With impressive pomp for a conversation that could have been held in a phone booth, the operator announced: “Your first question will be from David McFadgen at Cormark Securities. Please go ahead.” Dave said “Hi.”

He asked how the Indigo superstores were doing. The superstores have long been the drivers of the firm’s business (representing roughly two-thirds of sales) and Dave had noticed that this year they brought in $595 million, still down about 20 per cent from pre-pandemic levels. He asked if and when the superstores would reclaim their accustomed heights. Heather exchanged pleasantries with Dave before answering: 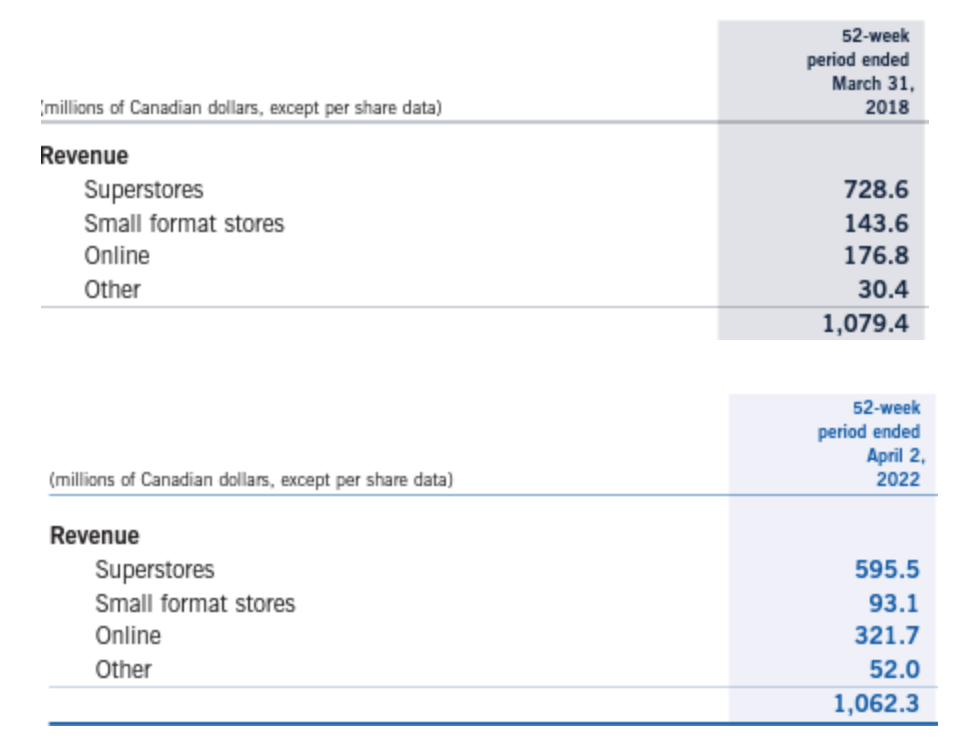 What we’re seeing is the traffic is still—it’s still not where it used to be, and particularly in the downtown core. We’re just looking, for example, downtown of Toronto, which is a key market for us. Traffic is still only about 60 per cent of what it was. But what we are seeing is the beginning of movement up. It was 50 per cent or 55 per cent down a couple of months ago. So, what we need to see is the traffic to come back to at least 90 per cent or 95 per cent of where it was.

I could hear Dave thinking that Indigo needs superstore traffic to hit 120 per cent of where it was, given that the company had been losing big money pre-pandemic, but he kept that to himself.

Heather’s explanation reminded me of something Barnes & Noble CEO James Daunt recently said of his superstores in the US. Eight of the ten largest American book markets, he reported, have been slower to emerge from the pandemic than the rest of the nation. All the best growth has come not in New York or San Francisco but in mid-sized markets such as Portland, Maine, and Fresno, California.

US book industry analysts have an explanation for this major-market doldrums: COVID accelerated migration away from big cities, and those most likely to flee were the middle-class and upper-class families that do most of the book-buying. The analysts aren’t sure those big-market sales are ever coming back. If they’re right, and the same migration phenomenon has hit Toronto, Indigo might be a decade from returning to 90 per cent of its pre-pandemic numbers in its largest market, and that would be bad for the company and bad for Canadian publishing.

Dave’s next question was about Indigo’s online sales. As you can see in the charts above, they have almost doubled since 2018, obviously spurred by the lockdowns. That’s a hugely positive development but eagle-eyed Dave noticed that in recent months, Indigo’s digital business has started to slip, presumably because people are returning to their normal lives. He asked if the company thought it could hold digital sales at the present $320-million level or if they were likely to keep slipping.

You know that we never make predictions even though you ask all the time. But there’s no doubt that, in general, as people come out, online will go down. That said, we have announced publicly we have a launch of a major re-platforming in online and the introduction of some quite significant expansion in assortment. So, while we don’t expect it to be as robust as when all the stores were closed, we continue to see this as a growth channel for sure.

I’m not sure how to read that. There is an obvious tension between the expectation that “online will go down” and online is “a growth channel.” I think she means that online is bigger now than it was pre-pandemic and that once it settles to a new post-pandemic level, the company hopes to grow it from there.

In any event, the “new consumer” enthusiasm of last year’s call seems to have evolved into a new strategy of pursuing superstore and online growth simultaneously.

Heather added that the company has made new investments in its digital platform. There is some sort of new app coming, she said. A game-changer.

Heather did not sound pleased to learn in a semi-public forum that September was drifting into October and I don’t blame her. “In time for the holiday” is probably too late for the holiday—people have to find the app and start using it before it can have an impact. But good that it’s coming, regardless.

Finally, Dogged Dave asked how Indigo’s blanket-and-candle business was doing. I skimmed that part of the discussion. I want Indigo to quit selling crap general merchandise, where it competes with scores of other retailers, and double down on books, where it has bricks-and-mortar sales practically to itself. That’s the strategy Barnes & Noble is following under Daunt’s leadership. But that’s not where Indigo is headed. New president Ruis (the late-app guy) comes from a general merchandise background, not the book world. Crap now accounts for 41.5 per cent of company revenues.

I was hoping Fisherman Dave would ask about Indigo’s expensive foray into the more competitive US bookselling market, which is a bit of a headscratcher when you’re struggling in a Canadian market with no direct competition, but he appears to have been in a hurry to get on with his day.

So that was that.

To summarize, Indigo is poised, or caught, between superstores and online retail, between books and general merchandise. It has a lot of work ahead of it and its finances remain unimpressive (the share price sunk another 15 per cent after the call). Nevertheless, it’s out of the red and the worst appears to have passed. Thanks be to god.

The operator said “we have no further questions,” announced the conclusion of the call, and thanked everyone for participating.

Heather hung up without saying goodbye to Dave.