It started as polite talk…

Last Saturday, I sat on a “panel organized by the Nonfiction Collective—“promoting and fostering the range and depth of Canada’s true stories”—along with author Charlotte Gray and Biblioasis publisher Dan Wells. Tough call, which of us used the oldest photo: 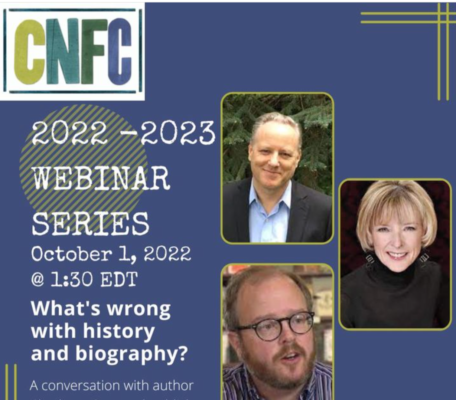 The subject of our discussion was the state of history and biography in Canada. Charlotte, the moderator, spoke first, recalling that for most of her twenty-five-year career as a historian and biographer there seemed to be a healthy demand for researched nonfiction. In the period 2010-2014, for instance, nonfiction prize lists routinely featured several well-written, fact-laden books of history, biography, and journalism written in the third person. In the last five years, there has been what Charlotte called “a sudden shift” to the first-person:

“The 2018 Governor General’s Award shortlist for nonfiction contained five memoirs; the 2019 shortlist was dominated by personal stories; all five of the 2020 nominees were memoirs. In 2021, there was only one book on the shortlist of five that was not a memoir. Self-interpretation of the writer’s own lived experience had trumped factual accuracy and deep research.

Similarly, the Writers Trust Prize shortlists for 2020 and 2021 were exclusively populated by memoirs.

Only this year did two research-heavy titles manage to elbow their way back onto the list. And the Charles Taylor Prize for nonfiction has been terminated.”

Charlotte was quick to add that none of us is hostile to first-person nonfiction (Dan and I both publish memoirs). “Memoirs,” she said, “like novels, can illuminate parts of our culture and society that are inaccessible to many of us—Indigenous stories being top of the list—but also the experiences of new immigrants or northerners or others.” All the same, first-person nonfiction rarely involves the deep, expensive, time-consuming research required by history and biography. “And it rarely explores the larger picture of Canada’s evolution as a country,” said Charlotte, “or our collective strengths in sciences, or its environmental challenges, or the political crises that shape today’s society.”

Dan and I were asked to explain the shift. I’m going to cover my comments briefly, in part because you’ve heard me before, but more because Dan jumped the tracks and, rather than focusing on the discreet problems of researched nonfiction, used his time to attack the entire Canadian literary economy with a chain mace.

I pointed to a confluence of factors behind the decline of researched nonfiction in Canada:

My friend Dan addressed the problems of researched nonfiction as a bookseller as well as a publisher (Biblioasis began as a bookstore in Windsor). The pandemic was a difficult time for booksellers and it forced Dan back into the shop to manage its purchasing for the first time in years. What he saw, looking through the publishers’ catalogs from which Biblioasis buys books, was “revelatory.”

He divides the year into two seasons, a long spring and a long fall, and buys 6,000 to 7,000 books per season from Penguin Random House, by far the dominant publisher in Canada. Of those, maybe seventy to 100 books might be authored by Canadians. Said Dan:

“The number of works of researched Canadian nonfiction that Penguin Random House might produce each season usually falls between one and three titles and, in recent seasons, I’d say it’s been closer to the lower end. So over the course of a full calendar year, Penguin Random House Canada and its imprints, including McClelland & Stewart, might publish a couple hundred Canadian titles, of which two to five would be considered researched nonfiction.

You go to HarperCollins [a second multinational operating in Canada], you get much the same. One work of researched Canadian nonfiction per season among the 3,000 or so titles, and these would almost always belong to Patrick Crean, who’s no longer there.

The same is true with Simon & Schuster [the third and last multinational operating in Canada]. So between these multinationals, they publish somewhere between 250 and 300 Canadian books every six months, of which, by my count, four or five might be works of Canadian history or researched nonfiction.”

In return for this “window dressing,” as Dan called it, the multinationals are allowed to import and sell tens of thousands of books into Canada.

“It would be easier for me, as a bookseller,” he said, “to build a section of Australian or East Indian history from the available titles of the multinationals than it is for me to build a Canadian history section. There are more new books available to me on the US Civil War or American neocon political posturing than Canadian history. And it’s not just that our market is flooded with American and British books, which is bad enough. It’s that their direct access to the Canadian market undermines the ability of Canadian publishers to increase their own revenues which they can then, in turn, invest in the publication and promotion of more and better Canadian books.”

Dan was arguing for the old model of Canadian publishing, under which foreign publishers operated through Canadian agents. That system allowed the likes of McClelland & Stewart to become major players in the last century and underwrote their Canadian publishing programs. Our federal government blew it up.

It’s not that editors at the Canadian branch plants of HarperCollins and Penguin Random House don’t care about Canadian books, Dan thundered on, “it’s that they’re often not the final arbiters in the way that Ken at Sutherland House or Jack David at ECW are, which limits the kind of books they can support. I mean, the final decisions at McClelland & Stewart right now are largely made by people too often in foreign countries, beholden to shareholders and spreadsheets. That places Canada, I think, in the intellectual position of being more or less a colony to these large extra-national entitles. We are no longer able to decide which of our stories deserves to be told…

“So, the flooding of the Canadian market with foreign books, the collapse of the agent-distribution foreign-rights model which allowed Canadian publishers the financial cushion to invest in important, if not always commercially viable Canadian stories, especially when coupled with the decimation of the Canadian retail landscape by Amazon, big-box retailers, and Chapters-Indigo, which with every passing year becomes less a bookstore and more a lifestyle company, and the total obliteration of all review space and critical coverage, has created a situation where even the Canadian books that are published have a harder and harder time getting discovered by readers who might otherwise be interested in reading them.”

He wasn’t finished. After noting that Canadian independent publishers produce 85% of Canadian books yet occupy only 3.5 to 5 per cent of the total Canadian market, Dan said:

“I don’t think there’s a literate nation in the world whose native industry makes up a small percentage of its overall market. This, perhaps, is the real crisis of Canadian publishing, which affects researched nonfiction as much as anything. Until we can figure out how to ensure Canadian books make up a larger part of our own market, it’s unlikely there’s going to be any solution to the problems facing nonfiction writers.”

Unaccustomed as I am to being out-complained, I enjoyed it.

[Thanks to the Canadian Nonfiction Collective for hosting the event. If you’re interested in nonfiction writing of any kind, check them out.]