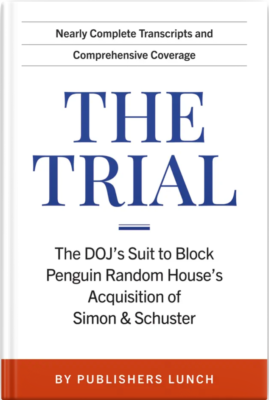 The good people at Publishers Lunch, the best aggregator of news about US book publishing, have aggregated the complete trial record of US v Penguin Random House into a single volume and made it available for sale as an ebook.

The Trial: The DOJ’s Suit to Block Penguin Random House’s Acquisition of Simon & Schusteris enormous: 700,000 words, which if printed would run to about 2,300 pages. It’s got everything from the opening arguments to every witness’s testimony to closing arguments to post-trial briefs. The highlights of the proceedings were mined in news coverage and in previous newsletters here—Random House of the Living Dead (SHuSH 160) and The Biggest Story in Books (SHuSH 159) —but there’s a lot more here.

This week I want to share a few things I found in the very back of the book. Appendix D is essentially a link to selected trial exhibits, of which there were 150, amounting to 800 pages. Publishers Lunch pulled the thirty most interesting for Appendix D, which is to say that the editors buried a good-sized virtual book within an enormous virtual book.

I found the following nine graphics of particular interest. 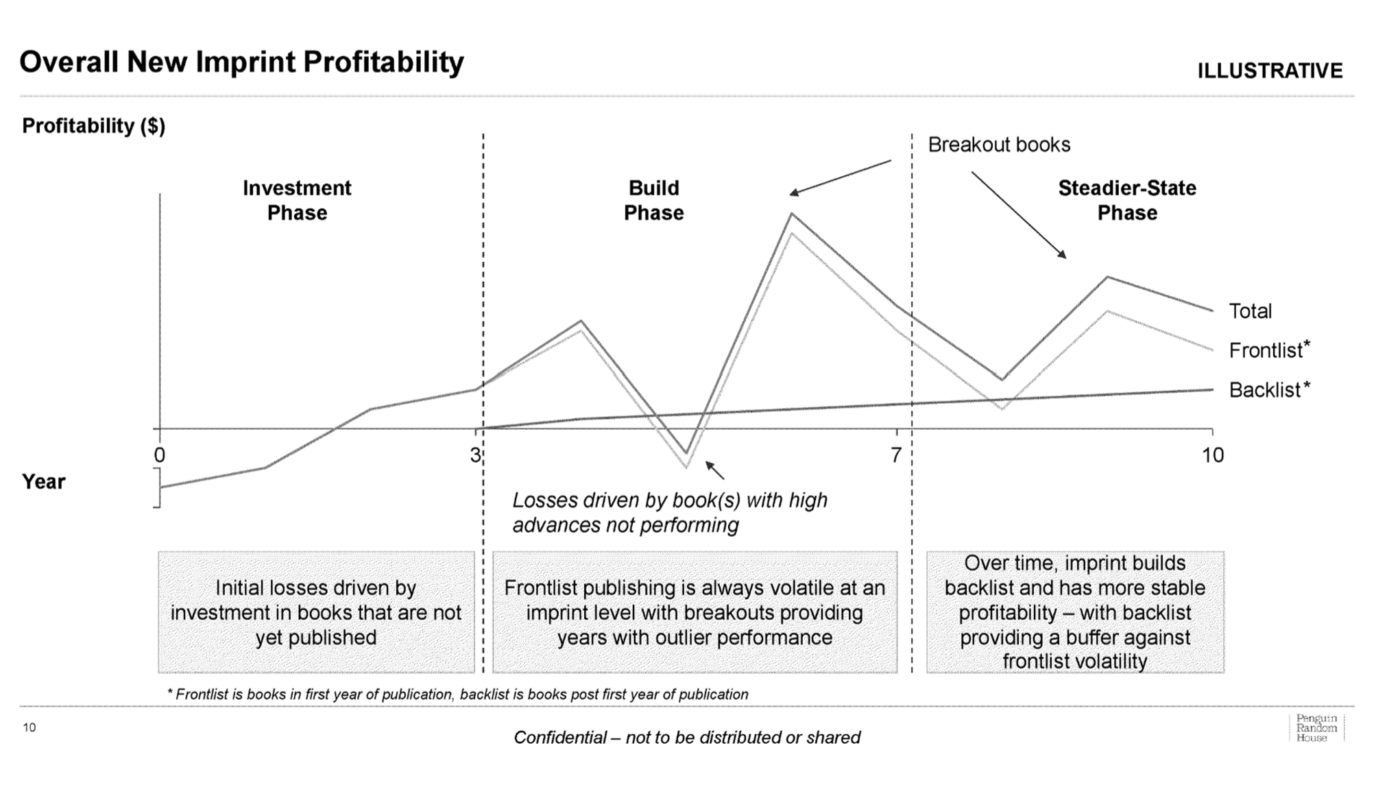 This one stood out for me as a new publisher. It’s a Penguin Random House (PRH) chart explaining why it’s almost impossible for a new publishing company to make money in the first five years of existence. You’ll notice how much profitability depends on breakout books (anything that outperforms expectations) and the backlist.

The chart is a model; it’s not based on real data. In real life, much would depend on the amount of capital available to the new publisher and how judiciously he or she chooses books. Also, a new publisher might get lucky and have a breakout book in year one. Or there may never be a breakout book, the backlist might be worthless, and the business dead by year ten.

The point is that profitability requires the occasional home run, and home runs are relatively rare.

As this next graphic shows, two out of three books lose money, and 4 per cent of those few books that make money drive 60 per cent of profitability (this is PRH data but PRH is so huge and has absorbed so many smaller publishers that its numbers are a reasonable proxy for the entire industry). So publishing books is a crapshoot, although the likelihood that four out of 100 books will outperform is fairly high. It’s just impossible to know which four. If it weren’t, a publisher would only publish four books, not a hundred. 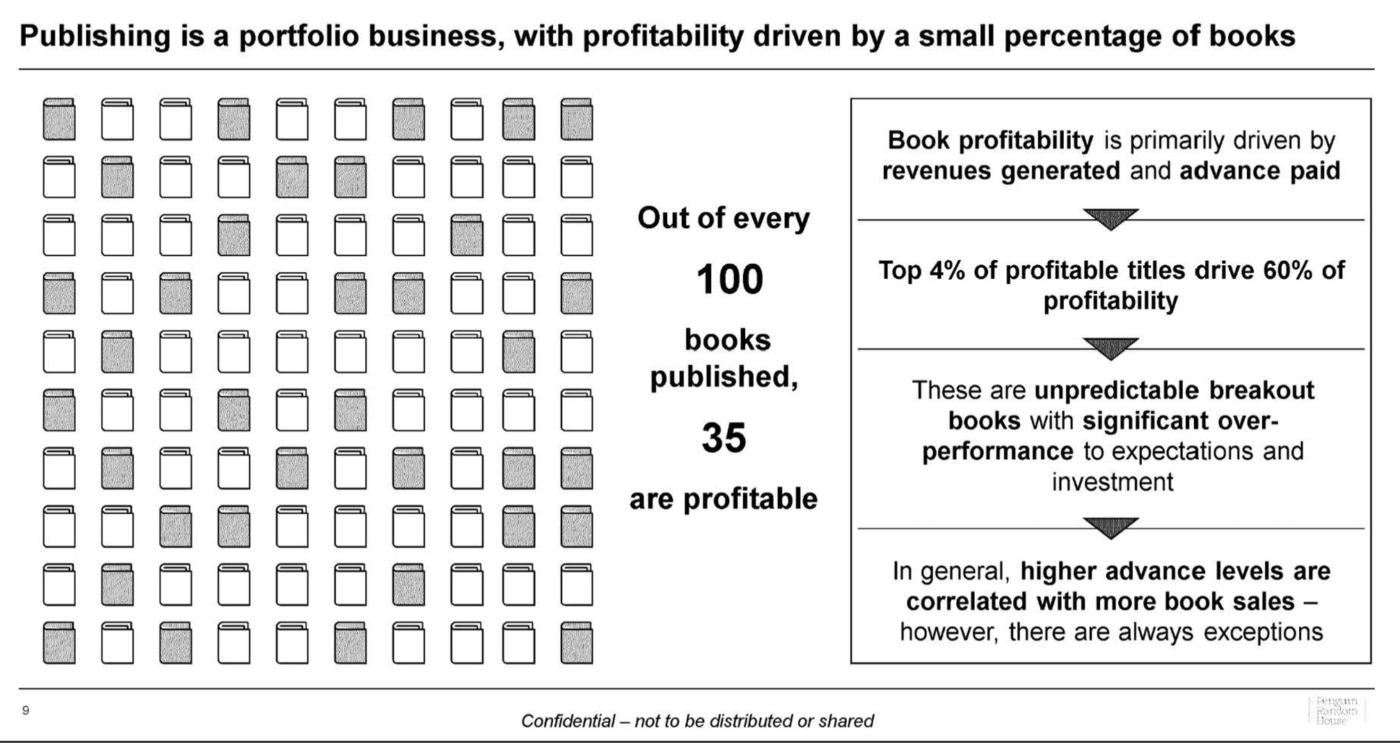 That it takes so long for a new publishing firm to begin earning money is why you so seldom see the big publishers launch new companies. Big enterprises of any kind tend to be bad at starting new ventures. They’re good at being big; startups need to be small, nimble, and hungry. And because big publishers are usually publicly traded, they tend to be short-sighted. Rather than spend a decade launching a new company, they prefer to buy and fix up an existing publisher that has already suffered the lean years and has a solid backlist and a record (or reasonable prospect) of profitability.

If the big guys launch anything, it is simply a new editorial operation or imprint. A new imprint creates a new line of books and uses the firm’s existing resources (production, distribution, sales, accounting, etc.) to get them to market. It, too, takes time but involves far less investment and risk than a whole new company.

That’s all summarized in the chart below. It also contains the categorical statement that there is “no history of companies starting from scratch achieving profitability in 3-5 years.” And it mentions that big publishing houses, when buying smaller publishing houses, generally pay 0.8 to 1.0 times the annual revenue of the target company. At the time the deal was struck, PRH paid more than 2.0 times Simon & Schuster’s annual revenue, which supports my view that the acquisition is a desperate move by a huge and uncompetitive PRH desperate to retain market share. 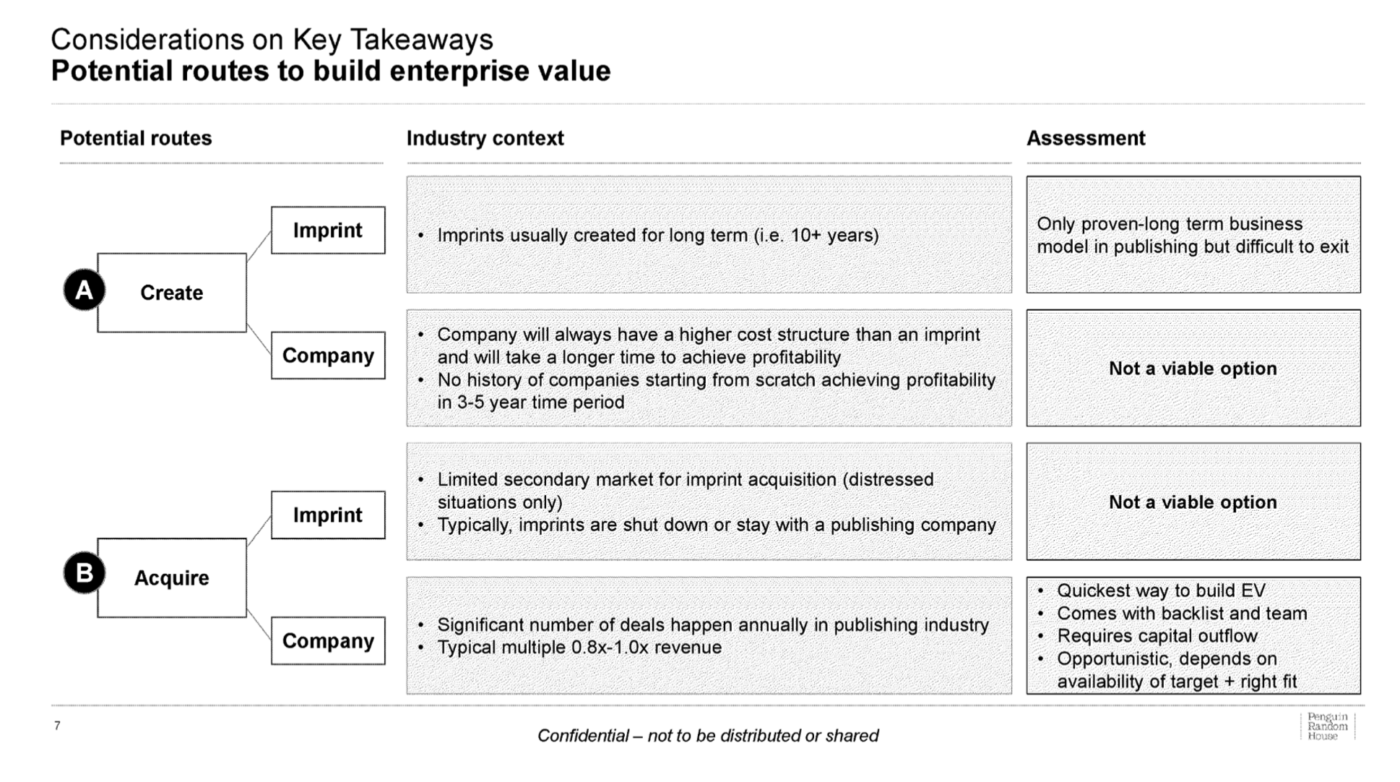 Here are two charts that get to the heart of the DOJ’s suit to block Penguin Random House’s acquisition of Simon & Schuster. The DOJ, remember, isn’t fighting this deal on behalf of the average American author. Its argument is that this will be a raw deal for the 1 per cent—big-time authors who receive advances over $250,000 per book. S&S is one of only four companies that routinely bid against PRH for such books; put it under the PRH umbrella and only three much smaller companies will be left to serve the 1 per cent. The rich might not get richer.

Random House’s 2013 acquisition of Penguin, the last big deal that reduced the number of large competitors in US publishing, is obviously relevant. Did that reduction in competition result in a raw deal for the 1 per cent? In this chart, the DOJ has created an elaborate index that indicates the average size of advances for anticipated top-selling books (those in the $250,000-plus range) declined after 2013 while advances for books with lower expectations increased. 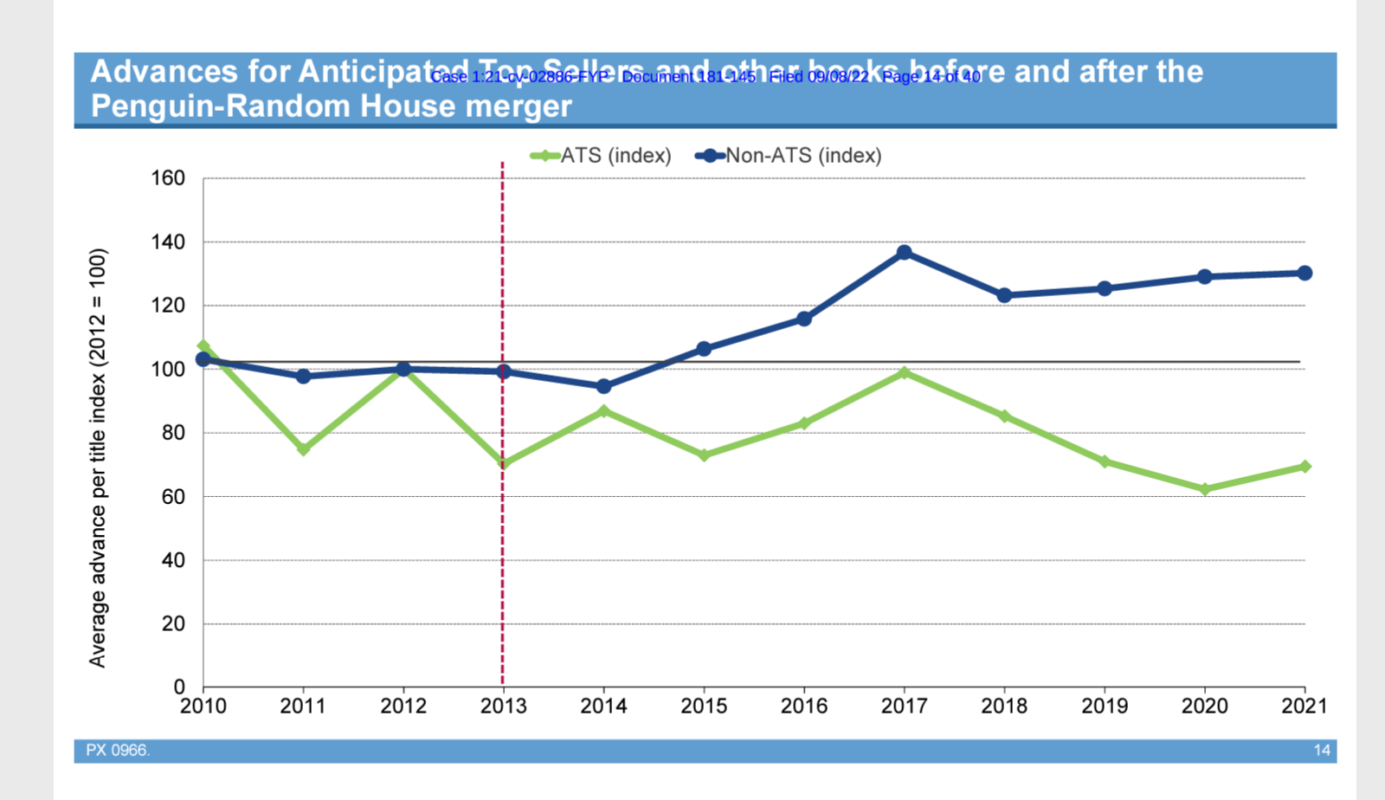 Penguin Random House lawyers, meanwhile, produced a chart that shows the total number of $250,000-plus contracts grew substantially after 2013. That’s always struck me as a flaw in the government’s case. But I’m not Judge Florence Pan, who will decide this case, and I don’t know if she will care about the total number of big-time contracts or their average size.

Here’s another set of dueling charts. A DOJ expert witness, Dr. Hill, produced a graphic that shows a lot of competition for books that are sold for advances of less than $250,000. Almost half of those advances are paid by the hundreds of publishing houses outside the Big Five (in this chart, PRH is navy, HarperCollins is red, S&S is green, Hachette is orange, Macmillan is light blue, and the small fry are purple). But once you get above $250,000, the government argues, you’re in a different universe. The little guys exit the stage, only a handful of mega-publishers remain, and a discreet market for top sellers becomes evident. The law requires a merger to be blocked if it can be proved that competition is diminished in some discreet market.

If Random House is permitted to acquire Simon & Schuster, it will have a combined 49 per cent of this discreet $250,000-plus market. That, says the government, will diminish competition for such books. 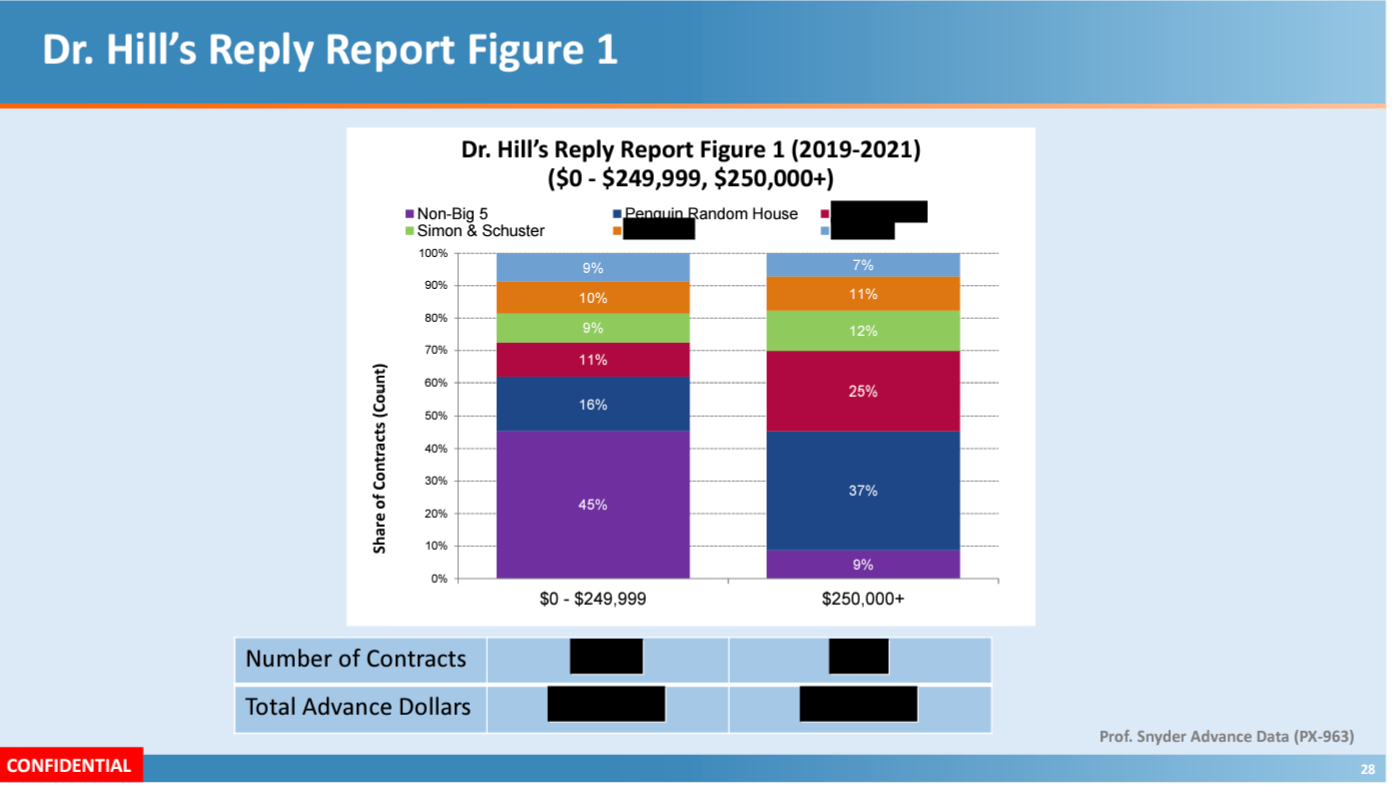 Penguin Random House’s lawyers slice the data differently. They’re trying to prove that the government’s identification of a discreet market for anticipated top-selling books is bullshit. Nothing magical happens above $250,000, they argue. Publishing business is conducted along a continuum; fewer firms compete as advances rise. Ho hum. 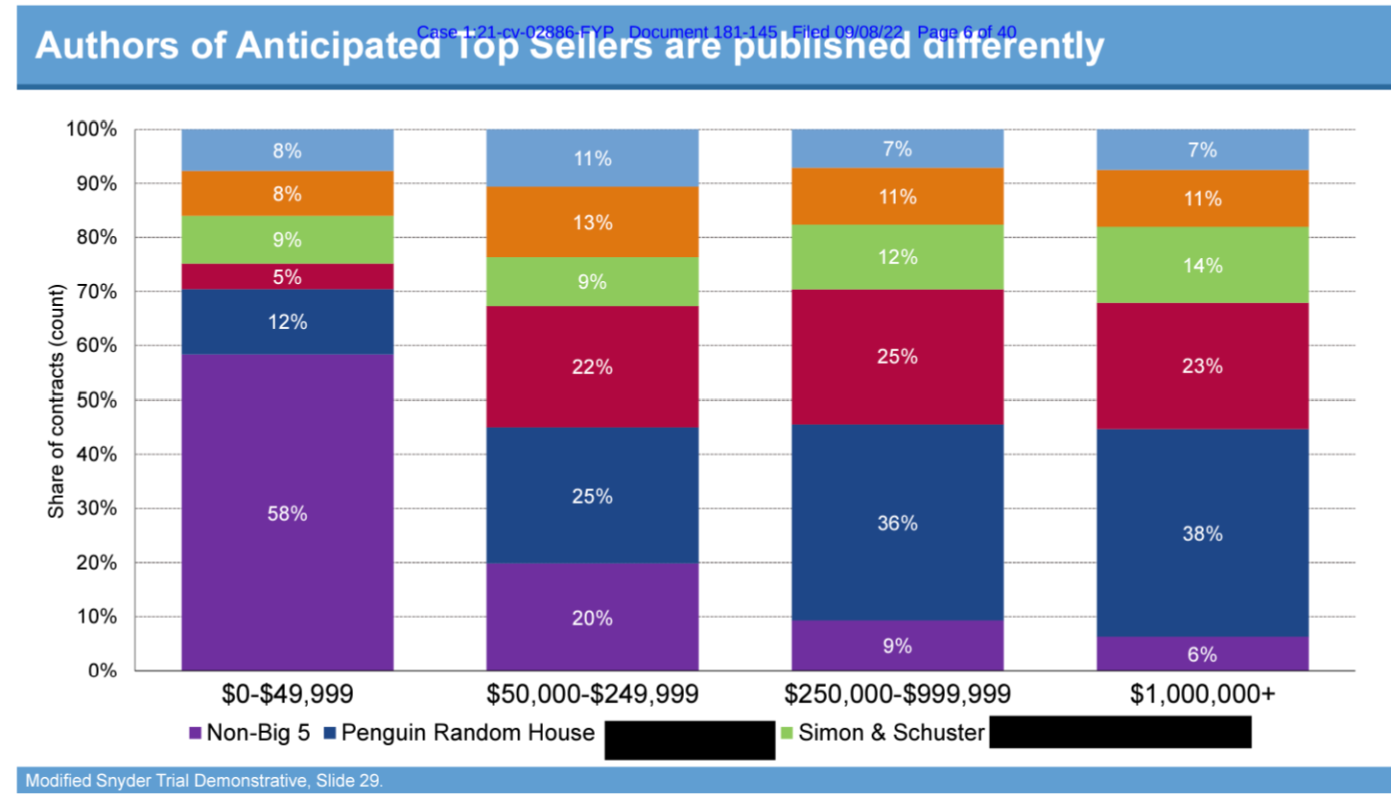 Judge Pan has to decide whether $250,000-plus books are a discreet market or an arbitrary point on the continuum.

Those of you who read Random House of the Living Dead will be familiar with my argument that PRH is a zombie company. It has failed to grow its business since the beginning of the new millenium. It keeps buying other companies as a proxy for organic growth. But the moment it sinks its teeth into a new acquisition, that company, too, joins the undead. PRH bought Penguin in 2013 and together they have been less than the sum of their parts, especially when you factor in the enormous purchase price of $3.5 billion. It came out at trial that in the six years after that merger, the overall book market in the US expanded handsomely while Penguin Random House stood still. As a result, PRH’s market share shrunk from 25 per cent to 21 percent. By buying Simon & Schuster, PRH is essentially paying $2.2 billion more to replace the market share it lost after buying Penguin. Here’s that history charted: 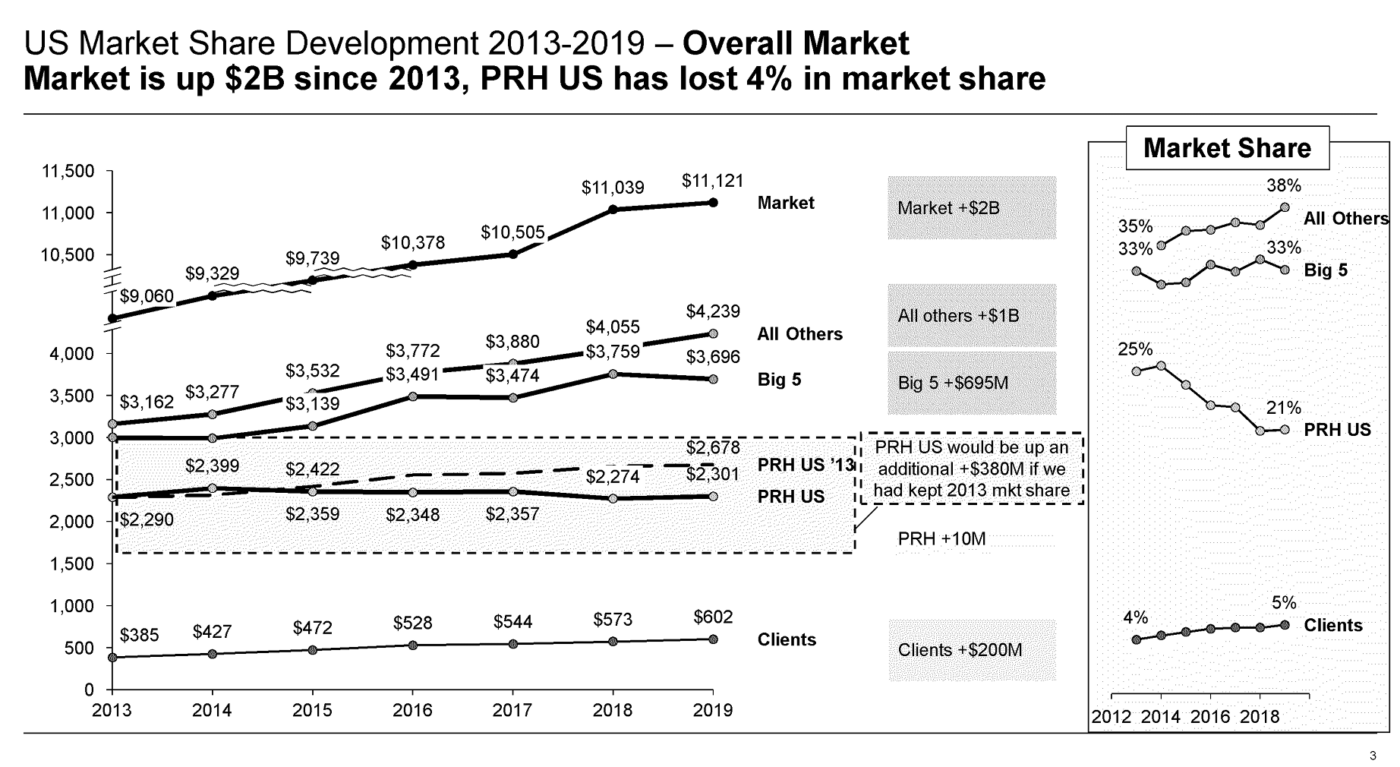 Addressing the Penguin acquisition at trial, PRH CEO Markus Dohle said: “We really screwed it up on the product side.” In other words, he blamed his editors for their inability “to acquire and publish enough of the books that our readers want to buy.”

The editors deserve some of the blame. It also came out at trial that PRH is spending far more money to buy far more books than any other publisher, year after year, yet as much as 58 per cent of its revenue comes from its backlist rather than its new releases. That’s an extraordinarily high dependence on the backlist.

Which editors, exactly, are screwing up? This chart points the finger at PRH’s fiction editors. Their sales dropped by almost a quarter in less than a decade.

Which editors, exactly, are screwing up? This chart points the finger at PRH’s fiction editors. Their sales dropped by almost a quarter in less than a decade.

But another chart suggests the editors might not be the entire problem. Most of the damage was done in the fiction categories of fantasy, mystery, romance, sci-fi—big chunks of which migrated to the self-publishing universe during this period. Net sales from these books fell from $349.2 million to $86.9 million (the chart is cut off in the appendix).

Executives at PRH seem to have devised this chart to excuse their lack of growth. But every other publisher in the US is dealing with the same trends, and they’ve all managed to grow their businesses.

I have seen nothing that indicates PRH has a bead on its problems. Hence my faith that the rest of the publishing world will grow and PRH will remain a zombie regardless of whether or not it ultimately swallows S&S.

Too boring for nonfiction

We received a lot of positive response to Dan Well’s bracing summation of the problems of Canadian nonfiction publishing last week. This note from policy expert and author Owen Lippert was typical: “It needed saying. As a student of medieval history, I applaud the direct approach.”

There were some interesting dissents. David Lemon writes (edited for length):

Canada’s history contains few great events, even fewer with international implications. Our domestic history does not present vivid protagonists and antagonists. There has been no great bloodletting on Canadian soil, no violent collision of ideologies. Canada has been ruled by democrats, not despots, and run by bureaucrats, not commissars. We have no periods of artistic foment, or, except in Quebec, fractious surges of cultural determination. (Instead, a subsidy-chained shuffle toward a fuzzy Canadianism.) During the last century of convulsive international strife, Canada, but for serious economic setbacks, has run smoothly upwards to a niche in the G7. We are the unique post-national nation, made of anarchic categories of distinction.

The larger picture of Canada’s evolution as a country, or our collective strengths in sciences, or its environmental challenges, or the political crises that shape today’s society, provides stories, Charlotte Gray suggests, for non-fiction. These are quite well rehearsed already, and hardly spell-binding to the non-fiction reader apparently still interested in the grandiose awfulness of the American Civil War.

Even if writers can make Canada’s stories interesting, which is their job, the country’s history and builders are said to be profoundly contaminated by colonialism and racism. Canada’s intellectual elite, the CBC, schools and universities and funding agencies across Canada are setting aside bodily the history, characters and culture of the West, especially as filtered through the British influence in Canada.

While non-fiction is increasingly polemical, fiction for most Canadians is almost entirely de-linked from Canadian history and personalities. Fiction is a buttress of non-fiction, imagining the past into a palpable reality. Canadians have, since the rise of mass culture in the late nineteenth century, been fused to American popular culture, and even to the highbrow stuff. Canada, except in Quebec, has not developed a native film industry. Such a placid ceding of the national imaginative narrative would seem impossible to stateswith a fifth of Canada’s population.