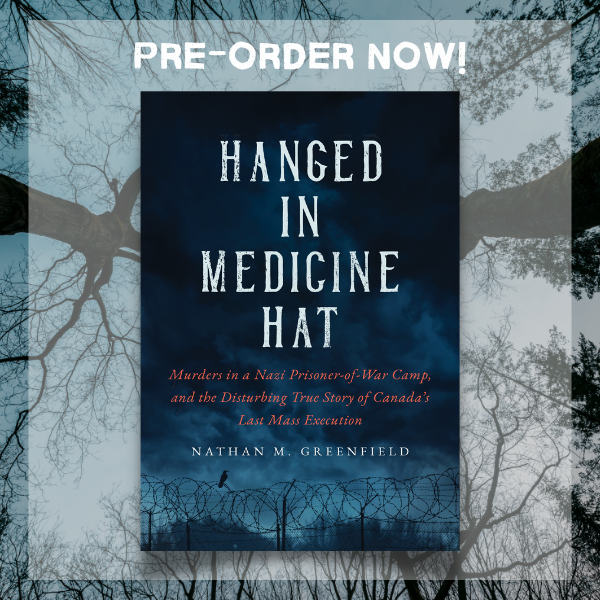 Christmas was just one week away but there was little room for sentimentality in those times.

No, Canada had left tens of thousands of her sons planted in soil far from home. The Second World War still reverberated in the Canadian psyche.

And on Dec. 18, 1946, four diehard Nazis (plus a sex killer) climbed the fatal 13 wooden steps in a Lethbridge, Alta., jailhouse and were hanged by the neck until they were dead.

It would mark the last mass hanging in Canada. Author and historian Nathan Greenfield has written the chilling Hanged in Medicine Hat, about the death cull that occurred seven decades ago.

Greenfield told The Toronto Sun that while researching the book, he was often surprised by profound events in Canadian history that had previously been unknown.

“The biggest was that these prisoner of war camps (POW) had their own camp Gestapo who would murder fellow prisoners if they didn’t have sufficient fealty to Hitler,” Greenfield said. “I was also completely surprised by the issue of homosexuality in the camps.”

He added: “Of course, it made sense that this went on, but it also became an issue for the camp Gestapo, and they would hold degradation ceremonies as punishment. This was part of their reign of terror.”

Canada entered the Second World War in 1939. Our British allies were concerned about the thousands of prisoners they were capturing, and it was decided they would be sent to Canada and South Africa.

A series of POW camps were established across the country that were noted for their humanity and the freedoms accorded the defeated Germans. Many of the soldiers, sailors and aircrew liked it so much that they emigrated here after the war. But not everyone took Canada’s benevolence in the spirit in which it was intended, Greenfield writes.

In a number of the camps, there remained a frightening level of Nazi true believers, mostly members of Hitler’s vaunted Afrika Korps. One of the most Nazified was Camp 123 in Medicine Hat, Alta.

Eventually, murder would visit the camp confines. Its leadership would even destroy Canadian newspapers that showed the Nazis dying by the tens of thousands in the Russian snow, slowly being beaten back in Italy, and German cities being pulverized by round-the-clock air raids.

Former Foreign Legionaire August Plaszek was the first to die on July 22, 1943 following an argument over ideology.

Next to go was Dr. Karl Lehmann (who Greenfield said was a spy) who was murdered in the camp on Sept. 10, 1944. His crime was allegedly playing a role in trying to overthrow the camp leadership. He also wasn’t shy about telling people he thought that Germany would lose the war (he was right).

In all, for the two murders, five men were sentenced to hang.

“I don’t think it was a question of vengeance,” Greenfield said. “No Canadians were killed. Documents indicate that the justice minister at the time, future prime minister Louis St. Laurent, did not want to go ahead.”

But his successor did, despite some legal entanglements. First, they were British prisoners and subject to laws of the U.K., not Canada and secondly, there were the accepted rules of war. “They thought Lehmann was a spy and the Nazis in the camp became more rigid after the 1944 Hitler bomb plot which they heard about on a secret radio,” Greenfield said. “Inside the wires, the camp was considered to be Germany.”

Canadian officers and guards recognized the camp’s hierarchy, even though they considered them loathsome, as the command structure.

“A command structure still existed (as it did in German POW camps) and in fact, they were right. But after Valkyrie (the plot to ice Hitler) the camp Gestapo became more strident,” Greenfield said.

The killers were eventually sentenced to hang, but the fighting that had roiled the planet for six, long years had ended.

“There were lots of letters calling for clemency, including from the YMCA,” Greenfield said, adding that some camps, such as the one in Bowmanville, filled with Battle of the Atlantic submariners and sailors was not one of them.

“One U-Boat commander who sank a ship in Halifax Harbour during the Battle of the St. Lawrence would eventually return to Canada and for 25 years was the chief engineer for the TTC.”

The commander of the Medicine Hat camp may “not have been the man for the job,” Greenfield said, adding he was “too hands off” and may have let Nazism fester.

“The camp Gestapo controlled prisoners’ mail, watched for code words and generally subjected POWs to the horrors of Nazi Germany.”

Werner Schwalb was the lone killer who died for the Plaszek murder the previous summer.

You can pre-order Hanged in Medicine Hat from Sutherland House Books.